Be the first to review “Open Championship 2023 Hoylake” Cancel reply

An 'Everyman' Package for the Open

The 2023 Open Championship with golf aT Portmarnock GC, The Portmarnock 'Langer' Links, The Island Club & Conwy

Play golf in Ireland. Sleep in Wales. Watch golf in England. The Faraway Fairways golf with Hoylake Open 2022 is quite an ambitious little programme, but it’s routed in pragmatism. We won’t be able to play the likes of Royal Birkdale, Royal Lytham, or Formby during Open week so we’re looking elsewhere.

Dublin has long been recognised as the cheapest gateway into Europe if coming from North America. It just so happens that within 20 minutes of the airport we have the world class links of Portmarnock. We use the Portmarnock resort to book-end the golf, starting off at the Island Club and picking up the Portmarnock Links course the next morning before taking the ferry to Holyhead (North Wales). We then make the journey by road from the Isle of Anglesey into the mountains of Snowdonia and spend the night at Portmeirion. The hotel is part of the experience. Anyone who has ever caught the 1960’s cult classic show, ‘The Prisoner’, will immediately recognise this place as ‘The Village’. It’s a genuine architectural masterpiece. It might seem appropriately surreal, but the village is actually a hotel. When the paying public leave, the hotel guests have the place to themselves.

We make our first visit to Hoylake the next morning, but rather than returning to Portmeirion that evening (it would become expensive and begin to stretch what we might describe as an unacceptable daily mileage) we’ve decided to bite the bullet and stay in Liverpool, a vibrant city where you will find things to entertain yourself with in the evening

We need to return to Dublin after it’s all over, but might as well sneak a crafty 18 in at nearby Conwy, host of 2020 Curtis Cup, before we take the ferry from Holyhead back to Portmarnock. Our finale is the world top-25 ranked links at Portmarnock to round off the golf with Hoylake Open 2023 package

Under normal circumstances the Liverpool hotel market isn’t that expensive so begins from a low base but we know that when the city hosts major sporting events hoteliers will seek to cash in. For this reason could also offer a shorter alternative itinerary that bases in the city and concentrates purely on the Open. The shorter version would have less va-voom about it, and would simply involve flying into Manchester and then driving over to Liverpool. 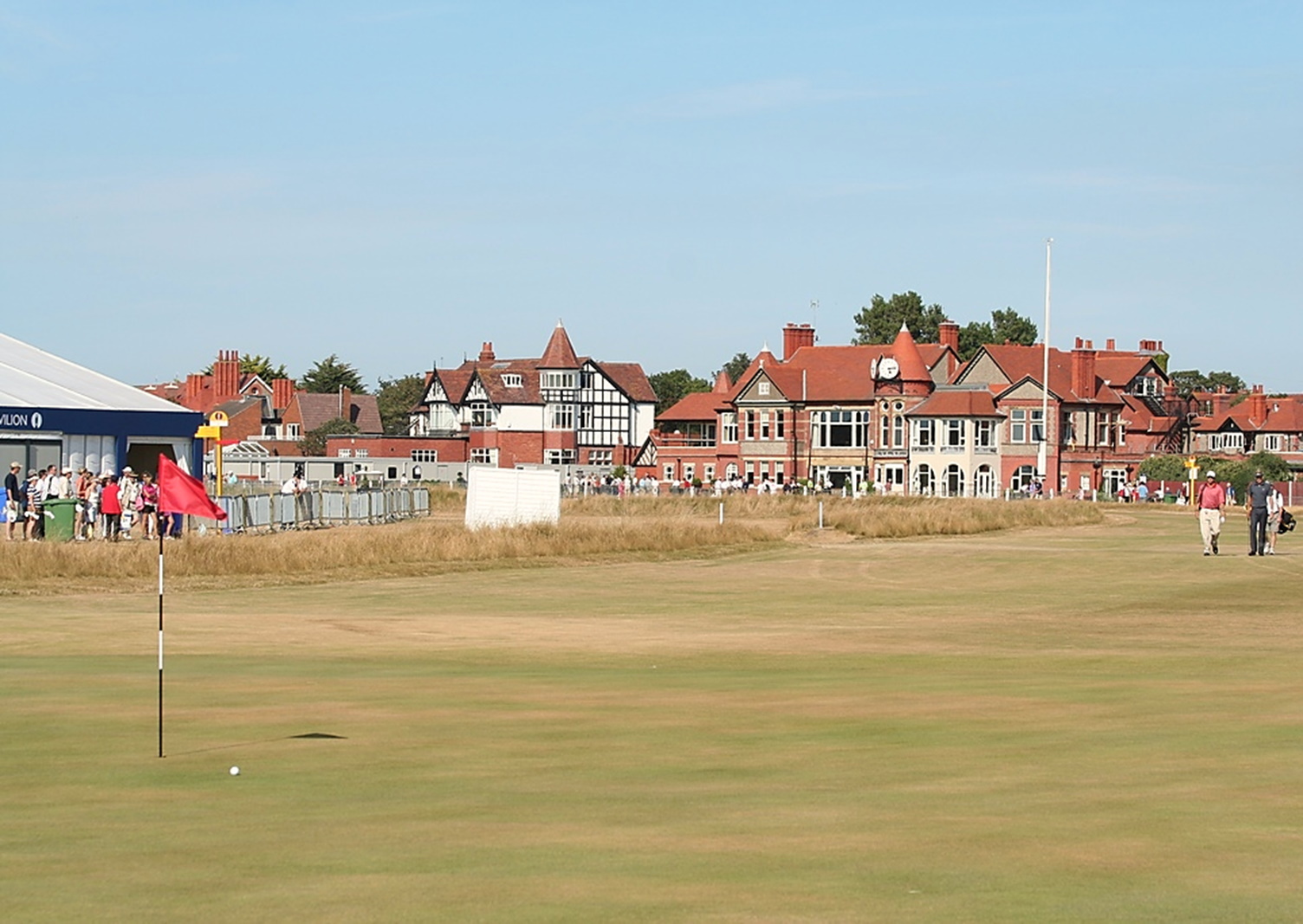 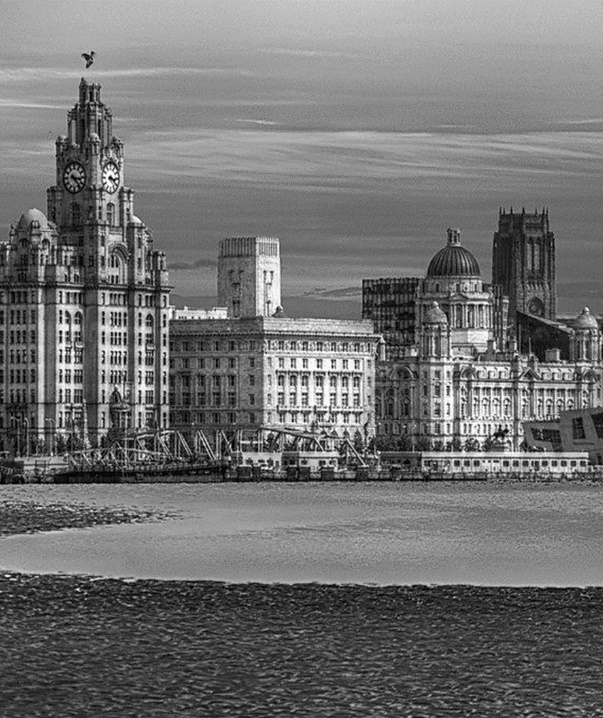 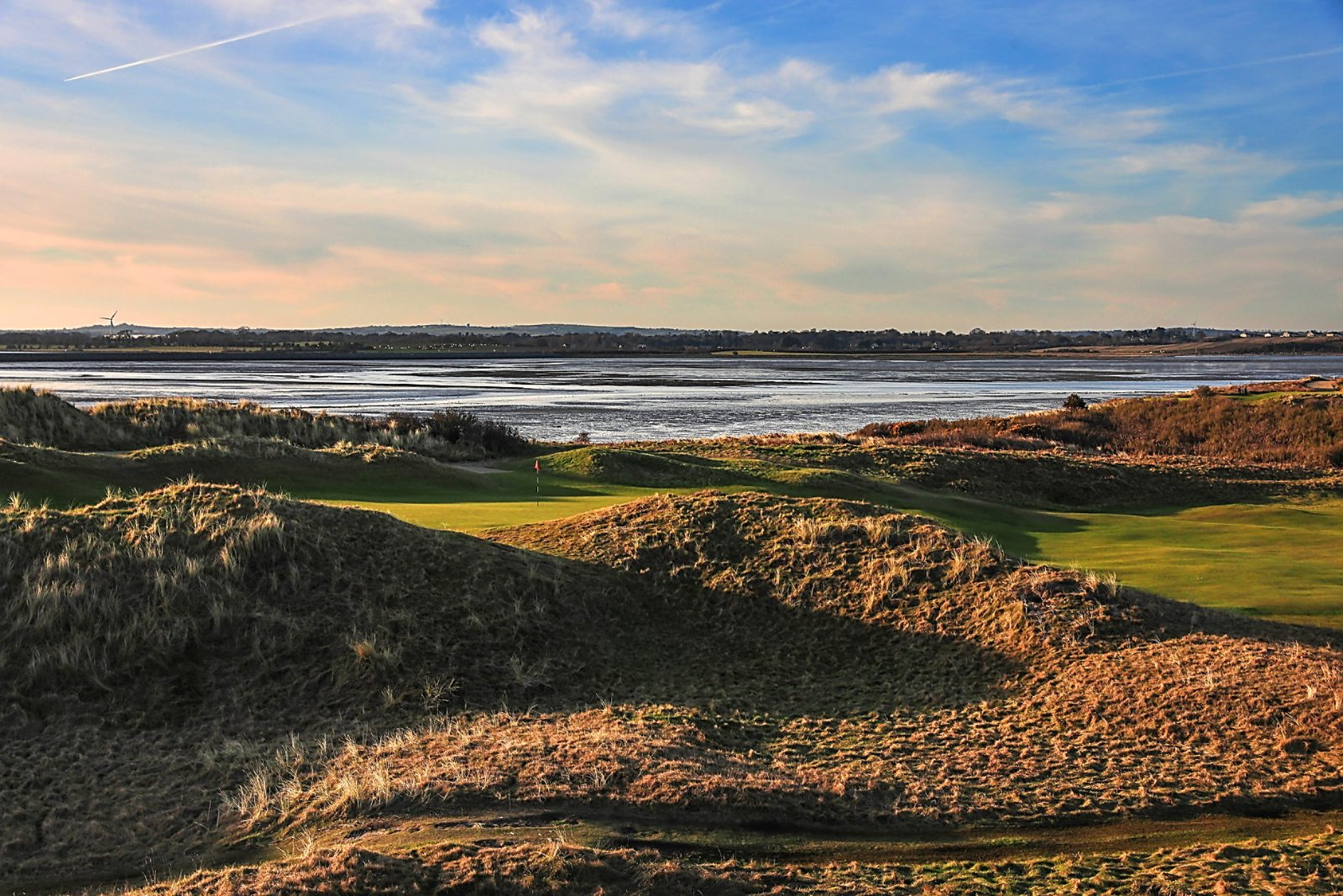 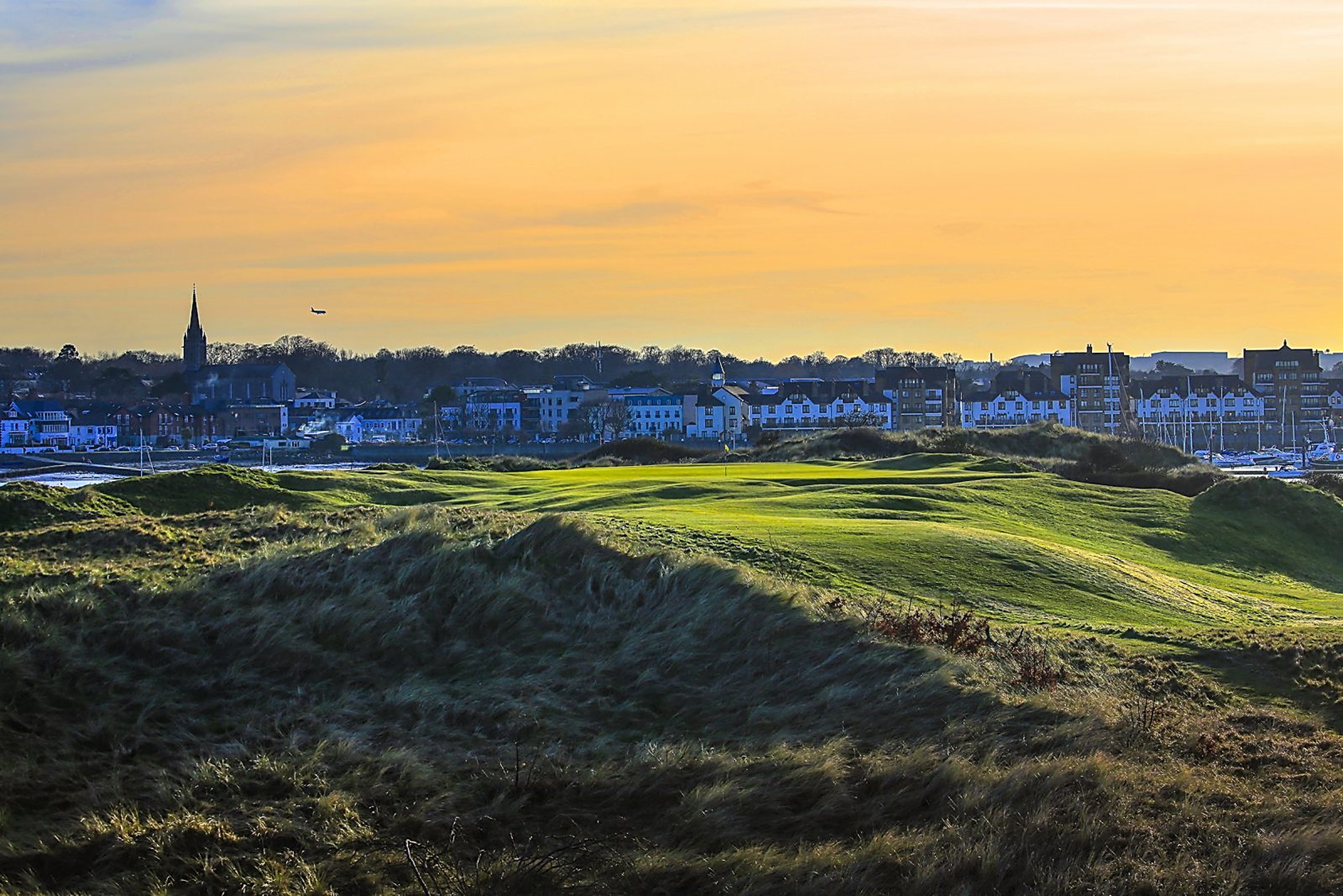 For good reason this course ranks # 78 in the top 100 ‘Architects Choice’. The Island Golf Club enjoys a unique setting bordered by sea on 3 sides. A classic links course set in a rugged terrain & nestled between the highest sand dunes along the east coast. ‘The Island’ was indeed an island once. It’s now attached to the mainland but it’s still an isolated peninsula-like spur of links land, sandwiched between the Irish Sea, the beach of Donabate and the Broadmeadow estuary. Few people know about The Island Golf Club, despite the fact that the course is over 100 years old and has featured in numerous ranking tables over the years. 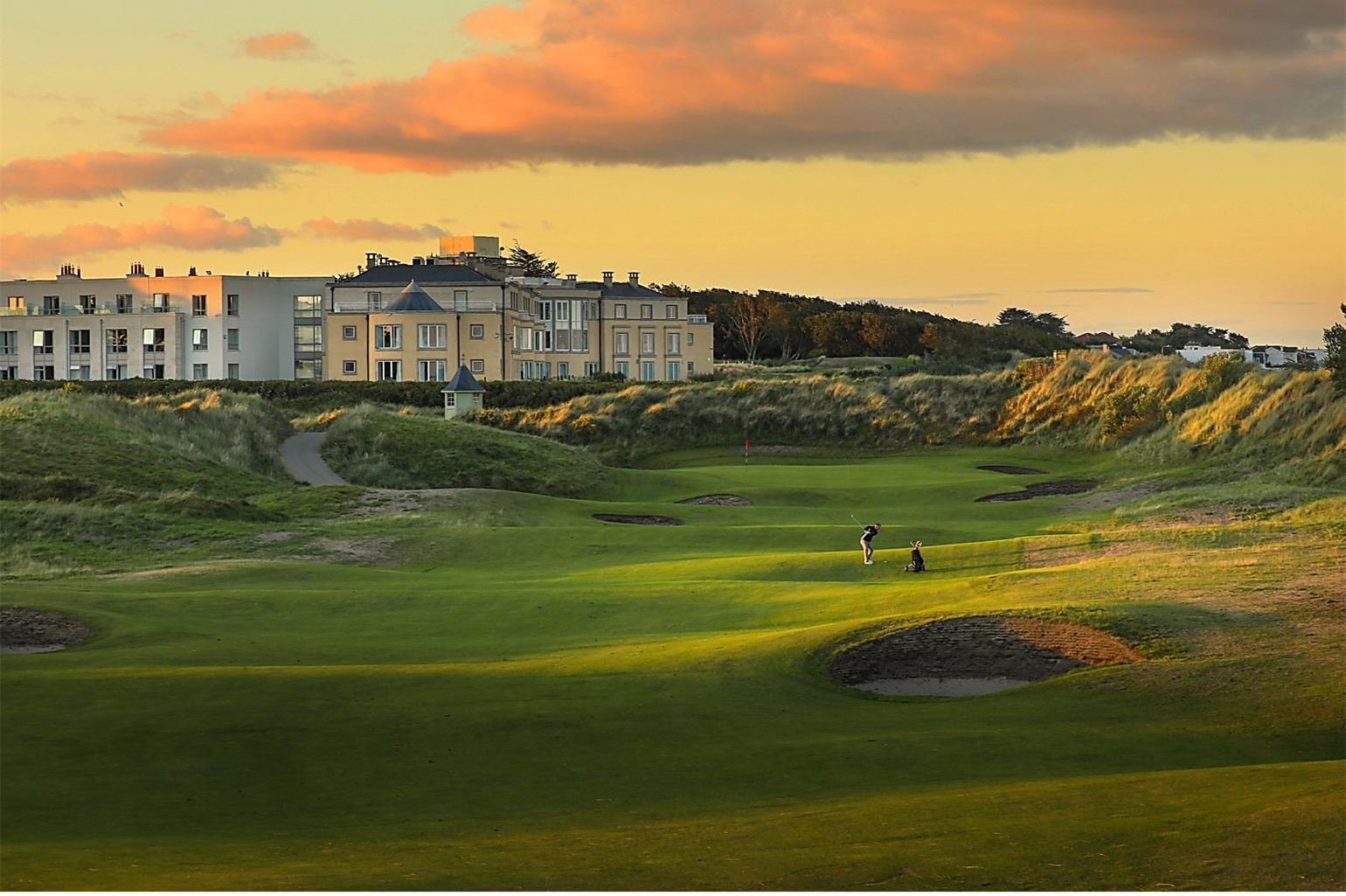 This Bernhard Langer designed links borders its illustrious neighbour, the Portmarnock Golf Club. For such a new layout, the Hotel Links is a very natural and under-stated course. There is nothing showy about the design; the natural land is used simply and effectively. The first eight holes play across gently-undulating ground with definition provided by varied grasses and pot bunkers. Then, around the turn, a cluster of shaggy sand dunes provides a much more pronounced aspect. Resort courses tend to be regarded by golfer’s with suspicion, but this one quickly established itself in Ireland’s top-20 and should be treated as an exception 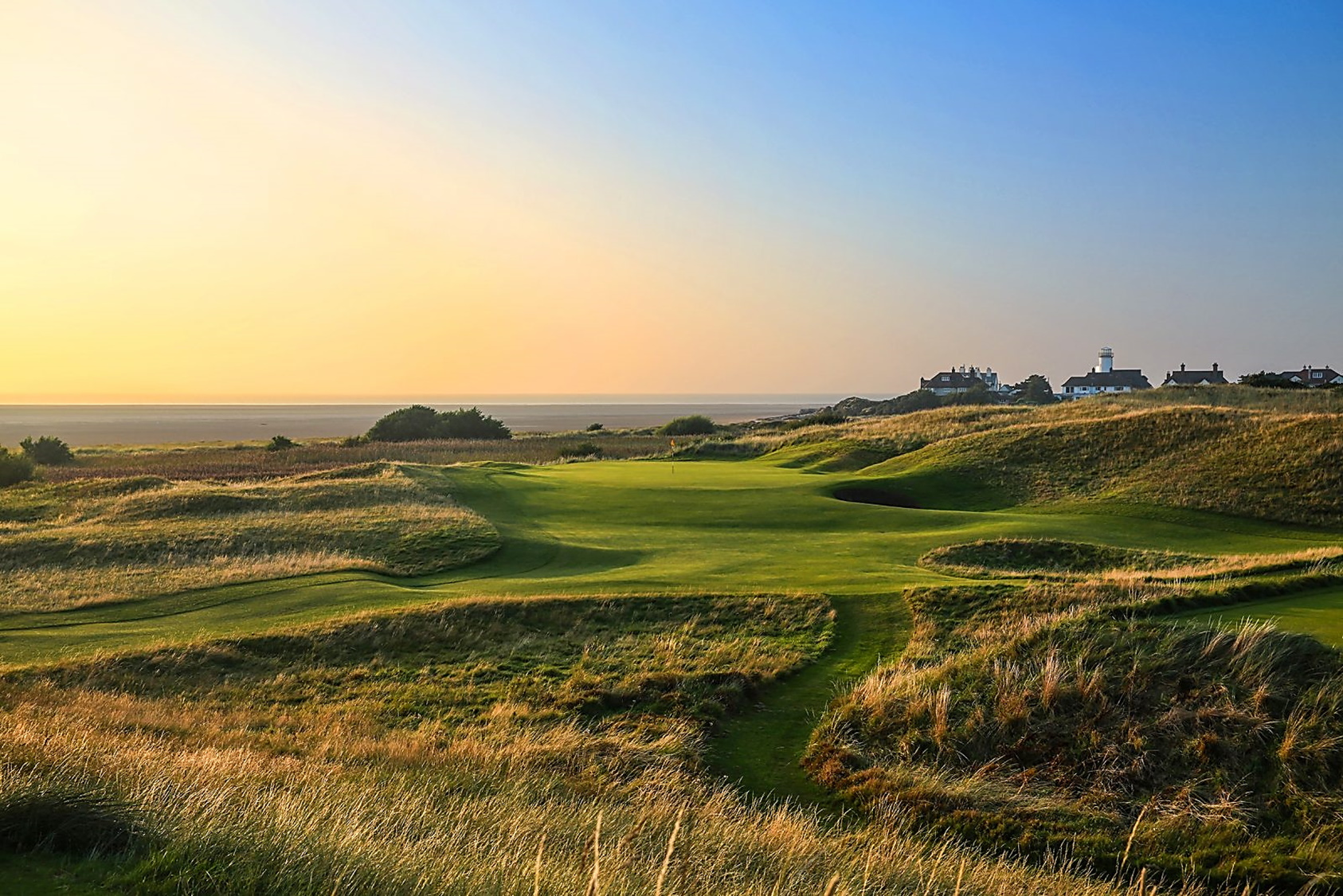 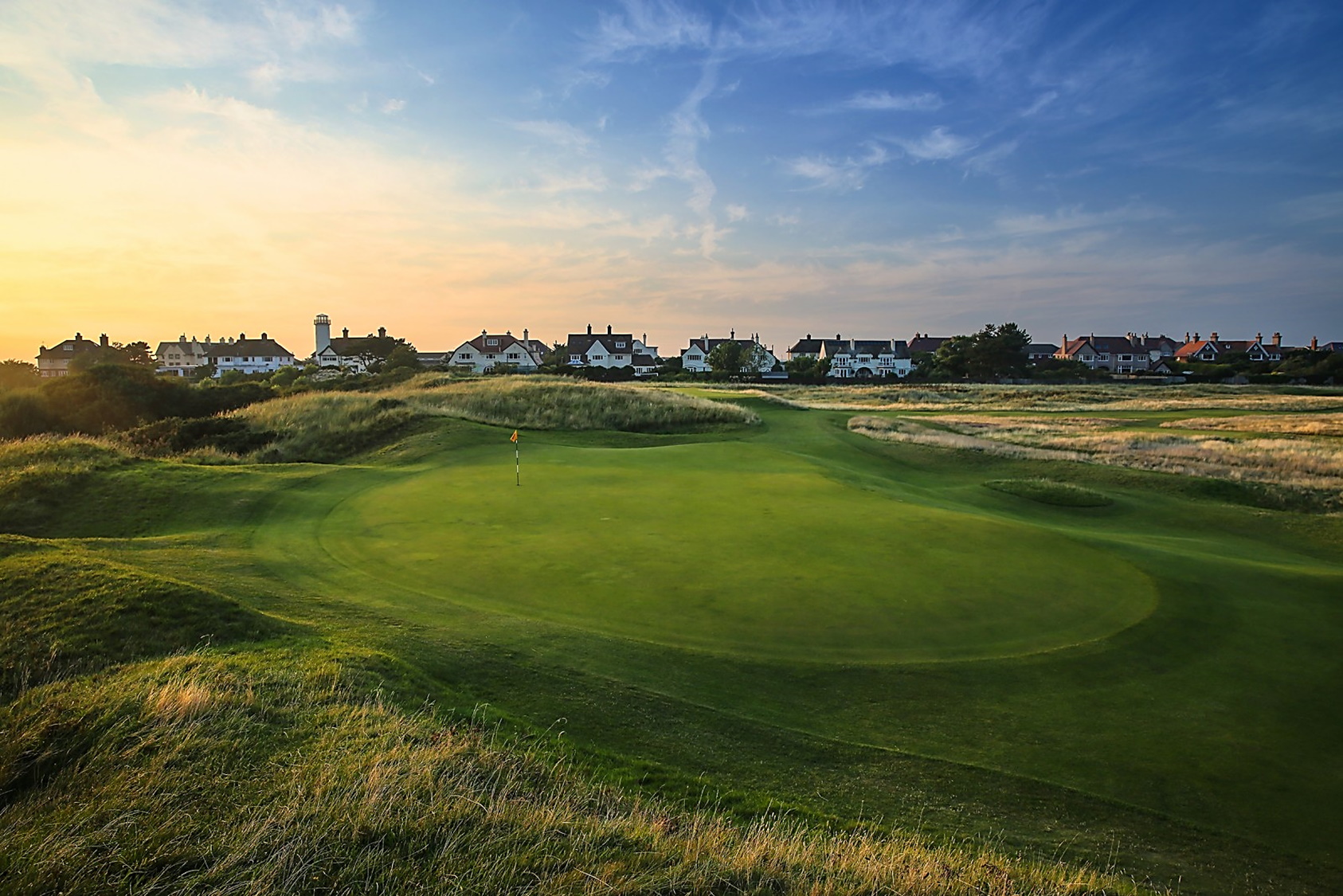 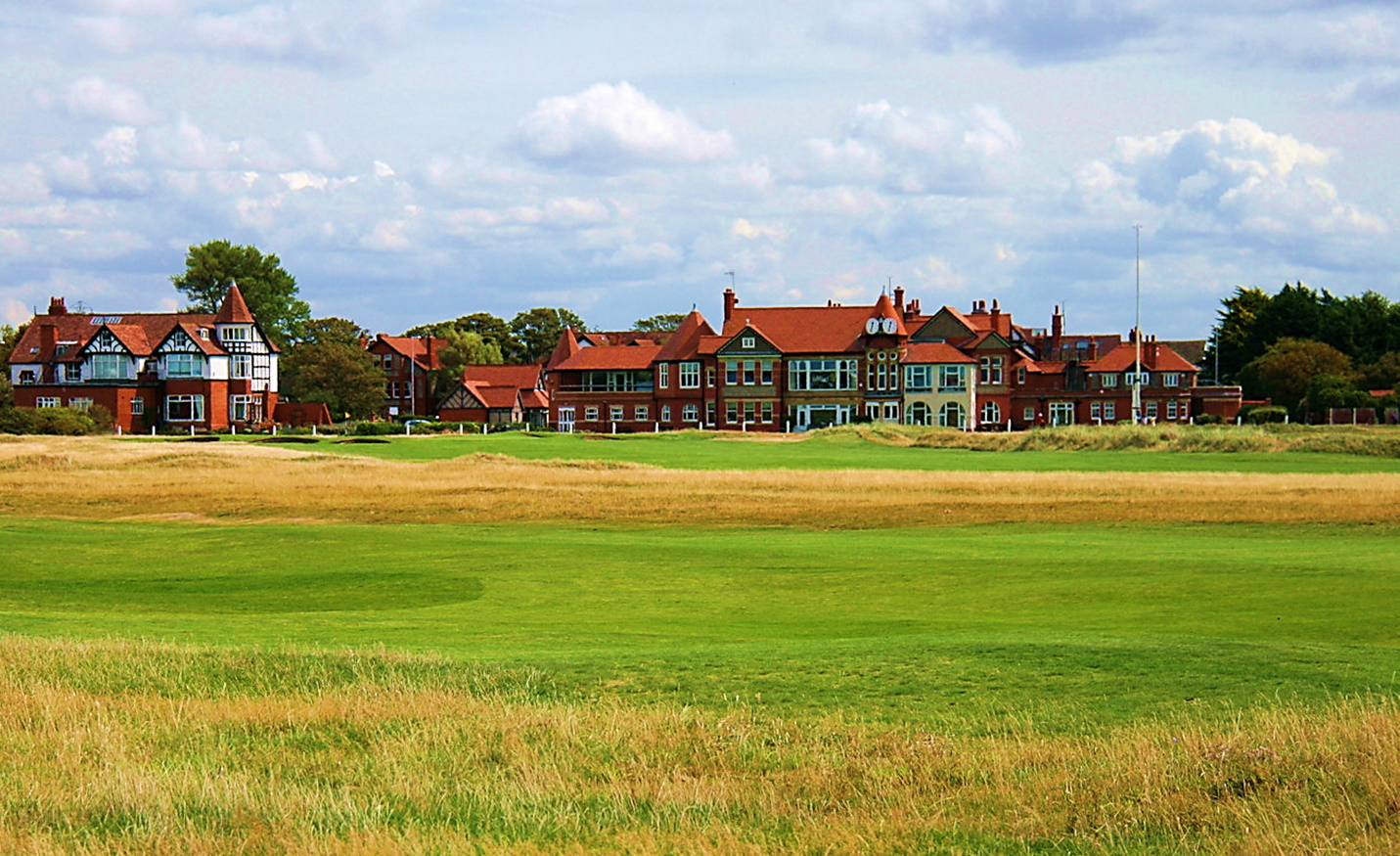 It would perhaps be inappropriate for Faraway Fairways to try and ‘guess’ your precise ticket requirements? There is after all an array of possibilities regarding the numbers of days and the different levels of access. We’d up generating an unwieldy price table were we try and cover every possible combination. The best solution is to make ticket purchase the subject of a separate discussion between us, and to omit them from any price estimates for now 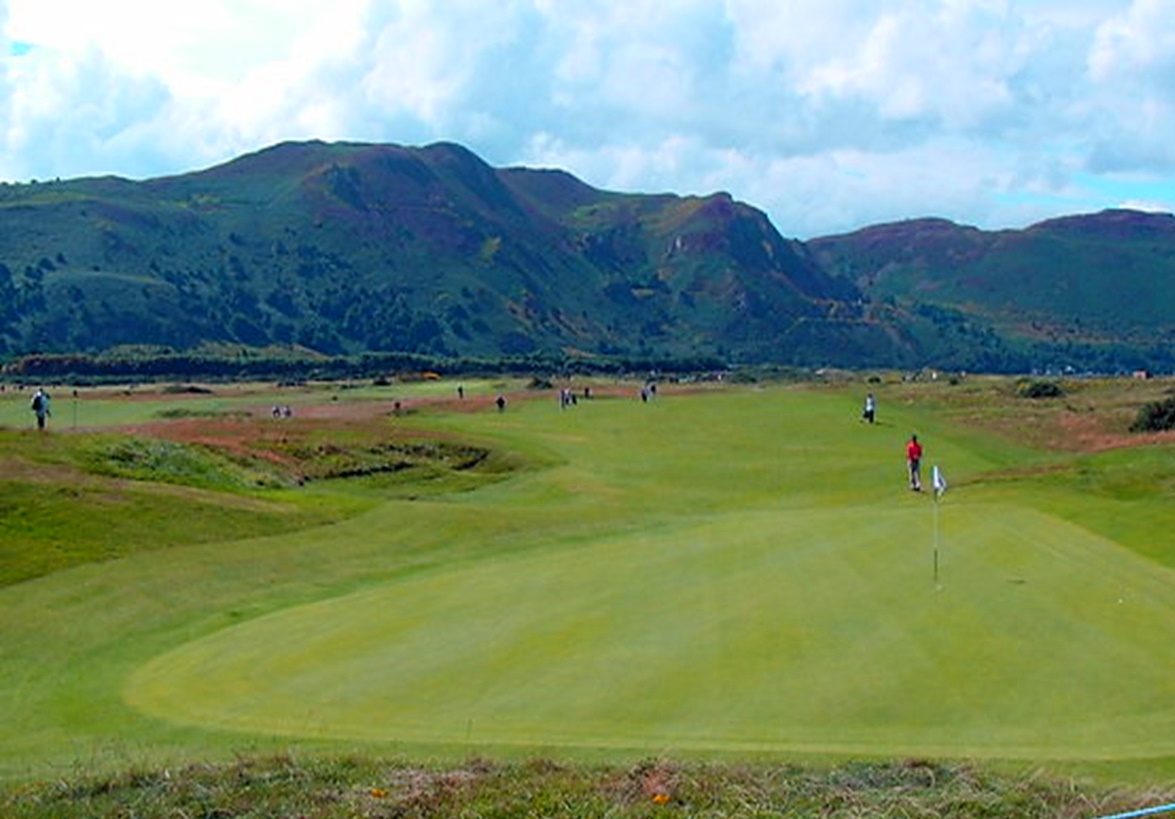 Conwy is a links, and host of the 2020 Curtis Cup, situated on the North Welsh coast at the  mouth of the river that bears the town’s name. It is overlooked on its south side by Conwy Mountain which rushes down into the sea, and on its north side by the estuary and Great Orme, (a limestone peninsula).  This stunning location and the challenging but fair links course will provide a memorable experience for all visiting golfers, and since its en-route to Holyhead, then it seemed opportune 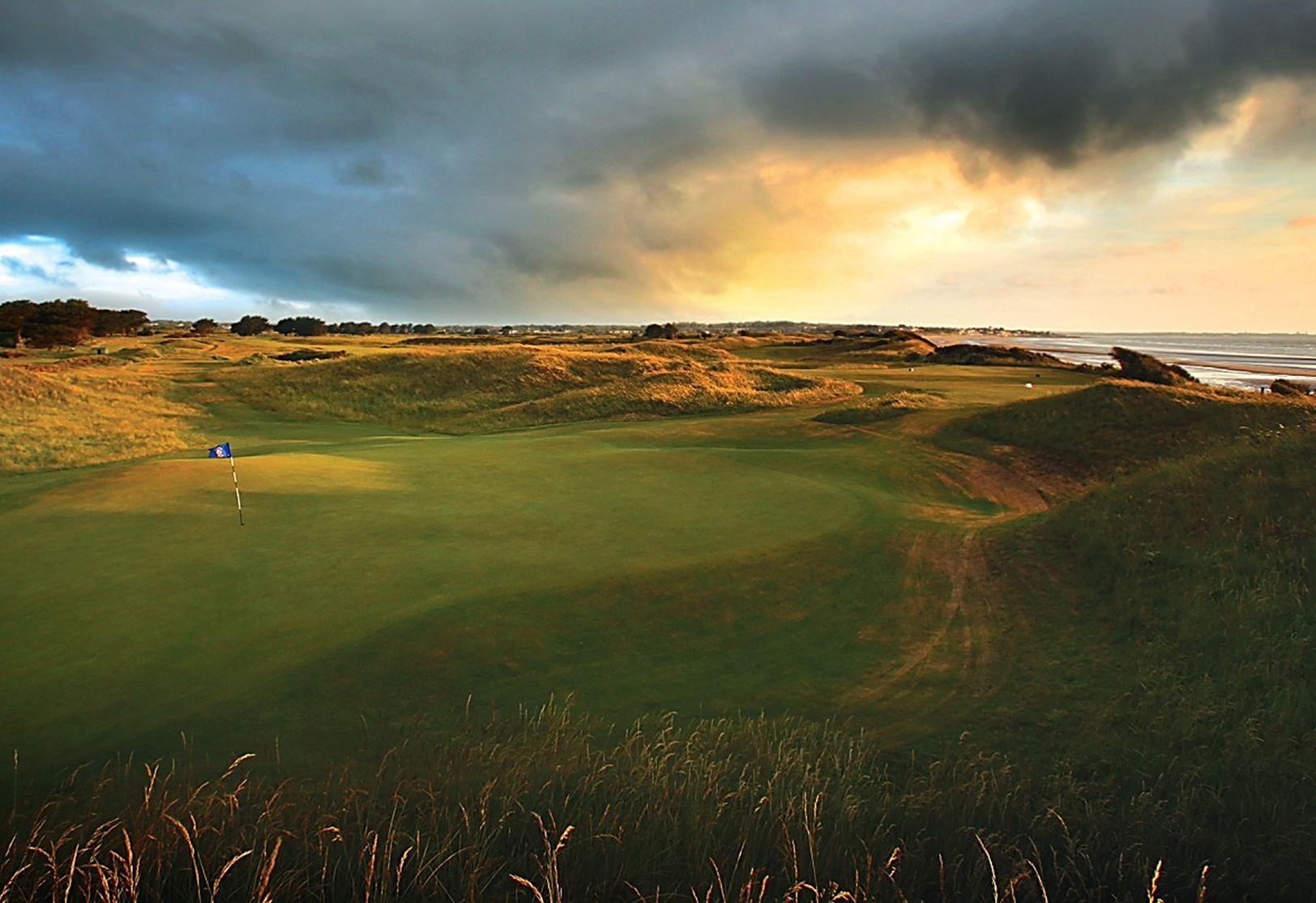 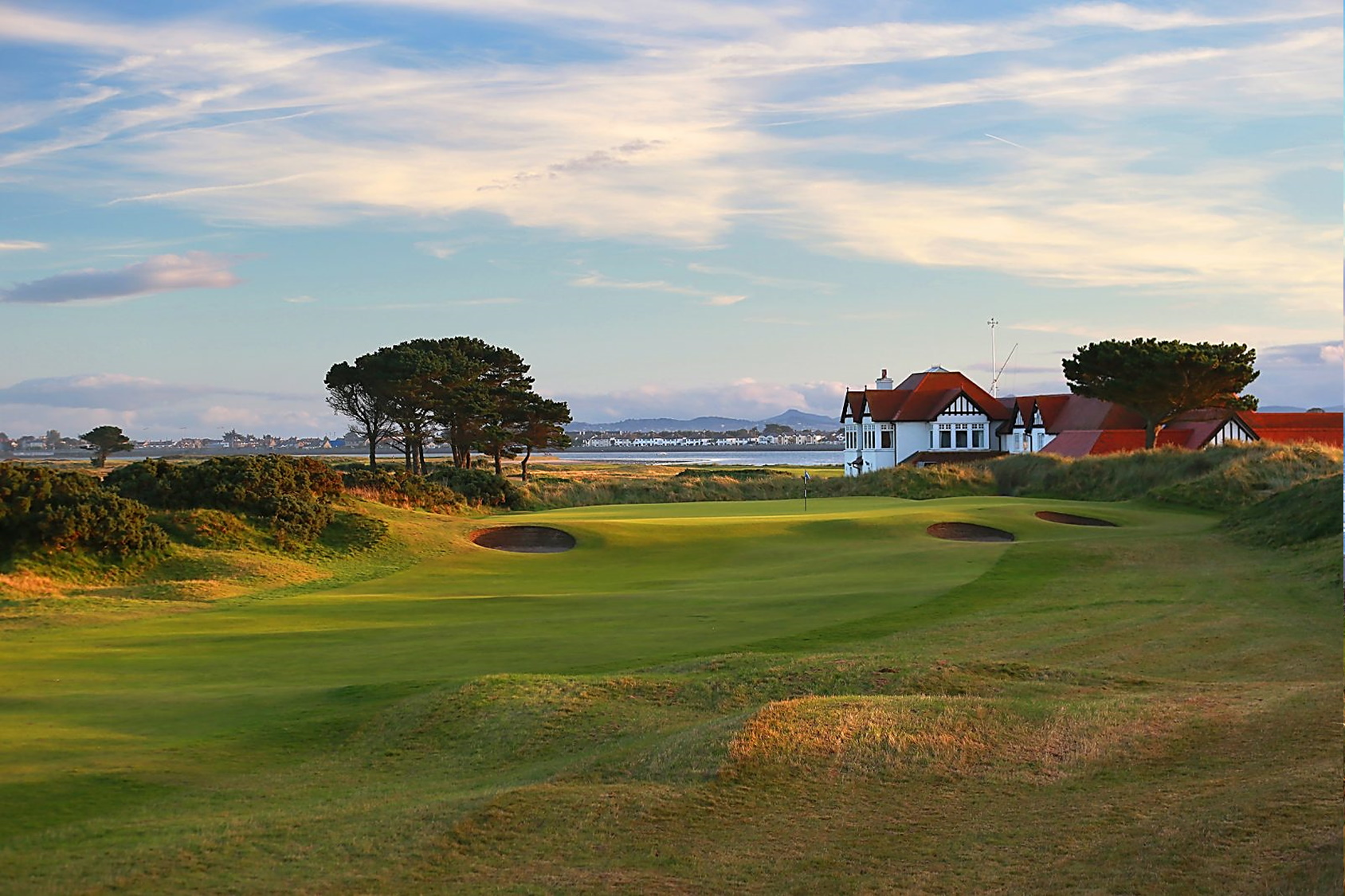 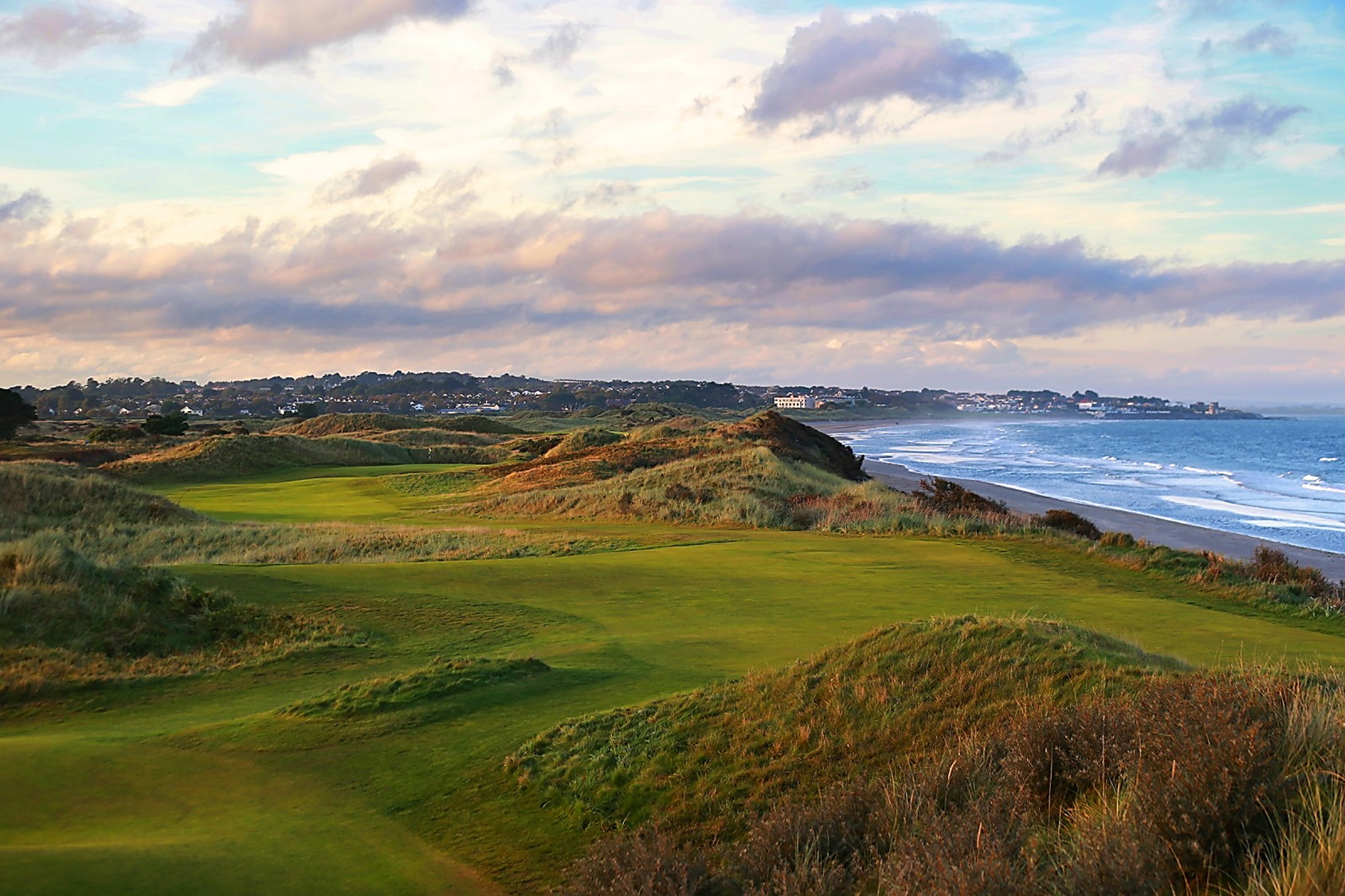 With a rich history closely aligned to the progression of golf in Ireland, Portmarnock has hosted numerous Irish Open Championships, the Walker Cup, Irish Amateur Championships and the British Amateur Championship. From Sam Snead to Seve Ballesteros, some of golf’s best-known names have tested their skills against this majestic narrow tongue of shallow dunes-land, just north of Dublin. Considered by many as one of the fairest links courses in the world it delivers an incredible challenge and true test of golf. Perhaps five-time Open Championship winner Tom Watson summed up the links best during his visits saying, “There are no tricks or nasty surprises, only an honest, albeit searching test of shot making skills.”